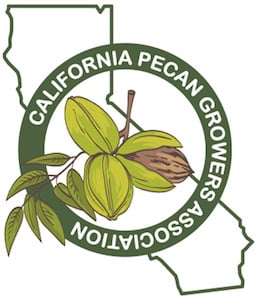 Where to buy California Pecans

HNH NUT Company is a bulk manufacturer of Pecans, selling in both the kernel and in-shell markets worldwide.

Please visit www.hnhnuts.com to learn more about products and services.

Please visit www.norcalpecans.com to learn more about products and services.

Carriere Family farms will be marketing both Shelled and In-shell Pecans worldwide.

Please visit www.carrierefarms.com to learn more about products and services.

In a medium bowl beat cream cheese until soft and creamy.

Place cheese on a baking sheet; bake until soft, 15 to 20 minutes.

Place pecans on a baking sheet.

Bake at 350°F until toasted approximately 7 to 10 minutes.

Stir over low heat when sugar is dissolved then increase heat slightly and bring sauce to a low boil.

Drizzle sauce over nuts and cheese.

Place a wire rack on a baking sheet and spray with nonstick spray.

Sprinkle both sides of chicken thighs with salt and pepper (or any additional spices of your liking).

In three dishes separate the following:
a) the flour
b) two beaten eggs, hot sauce, and 2 tablespoons of mustard
c) mix the coarse pecans, salt and pepper

Flour the chicken on both sides, then dip in the egg mixture then cover in the pecans.

Place on the wire rack and bake for 20-25 minutes.

Pecan Crust:
Mix together the panko, pecans, and parsley.

Press Pecan mixture over the top.

Spread toppings over the fruit.

Mix Balance of ingredients together. Should be crumbly.
Sprinkle crumbles over fruit.

When buying packaged shelled pecans, look for a freshness date on the label. If you can see the kernels, they should be plump, golden brown and uniform in size. Avoid dark colored or red pecans.

To protect the pecan’s rich oils and buttery taste, do not store shelled pecans at room temperature. For the best quality, always keep your shelled pecans in the refrigerator. They’ll keep for about nine months in an airtight container, and up to two years in a sealed plastic bag in the freezer. Pecans can be thawed and frozen repeatedly during the two-year freezing period without loss of flavor or texture. You do not need to thaw pecans before using them in recipes. However, it’s best to let frozen pecans reach room temperature if you want to grind them for pecan meal. For in-shell pecans, you can store them in a cool, dry place for up to one year.

Pecans have existed in California for hundreds of years. Initial seedlings can be found along multiple California waterways. Over the years, prime soil and water conditions have supported the growth of native pecans.

Some of the early pecan commercial production in California can be traced back to Southern roots. One such Texas grower was Hollis Roberts of Hollis Roberts Farming, Porterville, CA. In the mid to late 1960’s Roberts, working with Tulare County Extension Service Farm Advisor, Steven Sibbett, developed a 15 acre research block. This block was used to determine if pecans could be grown in California commercially. Dr. Fred Brison, Texas A&M University pecan expert judged nut samples from this plot and remarked he had never seen quality this good. Bill Stahmann from Las Cruces, New Mexico, at the time the world’s largest pecan grower and Keith Walden, a relatively new pecan grower developing thousands of acres in the Sahuarita, Arizona area, were called on for guidance. Once Roberts felt pecan trees could be a viable commercial crop in California, he followed up the research by planting a large commercial orchard on the often flooding Pozo River drainage in Kern County. By the late 1970’s other agricultural legal challenges impeded the Pozo River project from progressing.

Also in the late 1960’s, while Roberts was developing pecans in Kern and Tulare County, Chauncy Middleton and Jay Graves started Cal-Pecan in Fresno, California. These two Texans were church construction contractors who bartered with Linwood Nursery, the largest Pecan Nursery in California to grow their trees for their 100 plus acre project. Middleton and Graves are credited for bringing the Wichita cultivar to California from Texas. Wichita was a productive and good quality variety and is the most popular variety in California even today.

The father and son team of Al and Brian Blain purchased 300 open acres in Tulare County in 1974. Thinking they would develop the parcel to Walnuts, the Blains received a flyer from the Middleton/Graves team promoting a field day regarding pecans. After meeting Middleton and Graves, the Blain’s planted their first five acre test plot and eventually developed 125 acres of the 300 acres into pecans. The Blain’s continued to custom plant, develop, consult, and farm thousands of acres over the next thirty years.

In 1976-1977, Berrenda Mesa Farming Company was looking for a way to maximize the use of harvest equipment over a longer season by farming almonds, and pistachios, and then diversifying into pecans. Their Farm Manager, Mike Harvey, working with Dr. George Madden the former director of the U.S. Pecan Field Station at Brownwood, Texas, developed a 50 acre test plot in Lost Hills, California. In 1979, liking what they saw in their test plot, Berrenda Mesa Farming started their own pecan nursery. Pecan Nursery stock in California at the time was limited. This nursery allowed them to develop 600 acres located near McFarland, the largest contiguous pecan orchard in California. Although under different ownership today, this block is still the largest commercial orchard in the state.

In the late 1970’s, working together, Tommy Thompson and L.J. Grauke from USDA and Texas A & M along with Steve Sibbett established the National Pecan Advanced Clone Testing Service (NPACTS) at the Frank Lagomasino property in Tulare, California. This project was replicated nationally to evaluate clones from the USDA breeding program in Brownwood, TX. Several clones were released emanating from NPACTS.

Pecan cultural practices for California growers were greatly improved by local research conducted by Dr. Bruce Wood of the USDA Georgia and Steve Sibbett. Such innovations as implementing mechanized hedging following efforts by Deane Stahmann of Toowoomba, Australia. Hedging is now in common use for pecans nationwide. The tremendous importance of Aphid control to yield and quality was quantified by the local research of Wood and Sibbett. Aphids were previously not thought to be an economic pest.

The first commercial processing facility in California was developed out of necessity. Prior to 1982 all larger commercial pecan sales were predominantly shipped in shell to grocery stores in California. Rain Delays in 1982 brought a very late harvest season for pecans. Buyers were not interested in purchasing inshell pecans after the Christmas holiday season. After dealing with this concerning experience, Brian Blain along with a group of pecan growers and investors set out to build a commercial shelling plant in Visalia, California. In 1983 California Nut Shellers was in operation. This facility underwent several name and ownership changes and was in operation by the Blains until 2017.

James C. Hamilton, owner of Hamilton Ranches, a walnut huller and dehydrator located in Visalia, saw an opportunity in the pecan industry. In 1983, Hamilton designed a pecan dehydrator line and followed up in 1987 adding a pecan cracking and processing plant. Hamilton Ranches is still processing pecans thirty-five years later under the name HNH Nut and the guidance of owner, Blake Houston.

In 1975 the Robert Smith Family Developed approximately 200 acres in the Corning, California area. This property was purchased in increments by Garry and Ginger Vance, G & G Farms. In 2002, out of a need in the California pecan industry, the Vances built the first dedicated pecan huller/dryer in California. Over the next eight years the Vance’s Northern California Pecan more than doubled in size.

There are many other growers up and down the San Joaquin Valley that have had an impact on the California pecan industry. In 1990 Emmitt Skinner of Durham was one of the first to plant a Pawnee pecan block in California, and Keith Larrabee of Larrabee Farms has been fine tuning the growing process of the Pawnee variety on his 300 plus acres in Butte City since 2003.